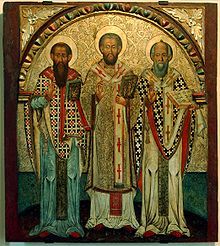 On January 30, the Church celebrates the memory of three great Saints, known collectively as the Three Hierarchs: St. Basil the Great, St. Gregory the Theologian, and St. John Chrysostom.  While each one has his own feast day, this feast was instituted in response to a debate concerning these Saints that took place during the 11th century.  While the faithful of that time were eager to honor these great luminaries, they were divided over the question of which was the greatest.  God then allowed St. John, Metropolitan of Euchaita to see a vision in which all three appeared in great glory together, saying, "As you see, we are one in God and there is nothing contradictory in us; neither is there a first or a second among us."  From that time, this feast day of the Three Hierarchs has been kept in the Church and the faithful have been led to honor them equally, recognizing their common participation in God's glory.

"Let us who love their words come together with hymns, and honor the three great torch-bearers of the Triune Godhead: Basil the Great, Gregory the Theologian, and John Chrysostom.  These men have enlightened the world with the rays of their divine doctrines. They are flowing rivers of wisdom, and have filled all creation with springs of heavenly knowledge.  They ceaselessly intercede for us before the Holy Trinity.”

- Troparion of the Three Hierarchs (Tone 1)